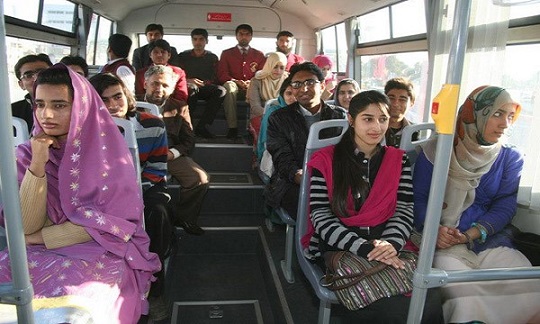 As dozens of cities around the world invest billions in new mass transit systems, users’ experiences and fears of victimization in public spaces cause gender disparities in accessibility. Gendered social norms regarding women’s traditional role in society and control over income further limits women’s access to mass transit systems. While fear of crime impacts all transit users, sexual harassment and victimization is a unique concern for women and girls that restricts their mobility and hampers access to economic opportunity.

How rampant is this problem?

Women around the world face sexual harassment and violence in many forms. In addition to more widely discussed issues of intimate partner violence and workplace harassment highlighted by the #MeToo movement, women also feel unsafe and are sexually harassed in public spaces.

Global surveys show that even in industrialized countries, women report feeling considerably less safe than men walking alone at night in their own communities. The situation is worse in developing countries, where the vast majority of urban women in India (79%), Thailand (85%) and Brazil (89%) report being victims of harassment or violence in public. Pakistani cities are no exception, where a 2014 study found that 78% of women in Karachi have “experienced sexual harassment/felt harassed or uncomfortable.”

Thousands of women in cities around the world may stay home for fear of victimization, perpetuating prevalent social norms further restricting their mobility. Many cities are failing to address women’s unique transport requirements through developing gender-sensitive transport planning and operations.

How do women use transport differently than men?

Despite the pervasiveness of this problem, the existing literature offers few insights into the stages of women’s and men’s journeys where physical or social circumstances make them most fearful of experiencing harassment or violence. To bridge this gap, the Urban Institute and the Information Technology University Punjab have formed a partnership to map hotspots where transport users have experienced violence or harassment, or felt unsafe in Lahore. Following the whole journey approach, we are using a custom-built smartphone application to explore how variations in transport operations, vehicle facilities, transit station design and urban land-use affect citizens’ perceptions of safety from their doorsteps to their destinations, and back.

The city’s ongoing replacement of the bus and minivan route-permit based system with Bus Rapid Transit (BRT) modern bus services and soon to be launched rail based Mass Rapid Transit (MRT) system provides a unique opportunity for cross-mode comparisons. Since the 1990s, public minivans had two front-row seats adjacent to the driver reserved for women, but most buses now have segregated women-only sections and in the latest models, transparent separators prevent driver-passenger interaction. From a female passenger’s perspective, change such as these are likely to impact their fear of harassment and victimization from male passengers and transport staff.

In preparation for more detailed fieldwork, we recently observed and documented users’ experiences in approaching transport systems from home including by foot, waiting at curbsides and designated bus stops, boarding and alighting various public transport vehicles, and interacting with fellow passenger and transit agency staff during ticketing, queueing and riding. Our team of 15 observers collectively spent hundreds of hours on 12 multi-modal routes. We aimed to cover all geographies of Lahore during morning (7-10am), afternoon (3-5pm) and evening (7-10pm) hours. To round-off our observations, we interviewed transit planners, government officials, drivers, conductors and security staff, and conducted focus group discussions with select groups of female passengers.

What have we found so far?

While preliminary, the following insights emerge from our initial research:

Through engagements with stakeholders in the Punjab provincial government’s various departments, we have a captive policy audience eager to learn and apply lessons into practice. In fact, three government agencies have jointly launched the Women Safety Smartphone Application providing users information on women’s protections against harassment in public spaces under local laws and allowing them to report complaints.

After 2-3 weeks of daily fieldwork involving 25+ public transport passengers early in 2018, we will create an interactive map of the city identifying both harassment hotspots such as unlit pedestrian bridges and their consistent physical features such as overcrowding. Accompanied by passengers’ safety perception scores of these and other places, the tool will offer decision makers descriptions and photographs of problem areas along with suggestions for low-cost improvements.

Building on this detailed descriptive and diagnostic analysis, in future phases of this research agenda we hope to undertake rigorous impact evaluations of the most promising interventions emerging from Lahore’s revitalized transit system. For example, we could assess how women’s fear of harassment has been reduced (or otherwise) due to the paperless “smart” ticketing system that eliminates conductor-passenger or driver-passenger interactions. Similarly, with support from local authorities we could undertake and evaluate the impact of information campaigns aimed at increasing male riders and transit staff’s awareness of the long-term psychological and social impacts of harassment on women and their families.

Keep up to date on our study findings by following us on Twitter @urbaninstitute, @ITUPunjab