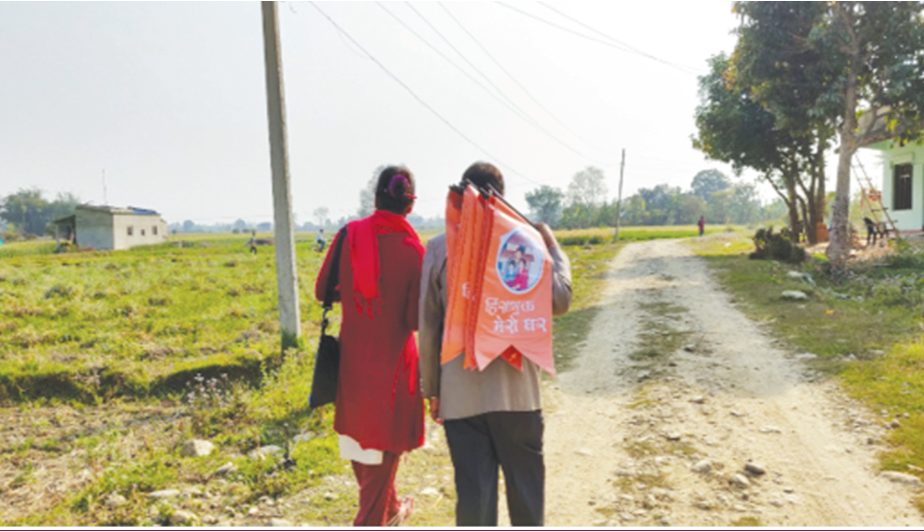 This was first published by The Rising Nepal National Daily. Permission to publish on the SVRI Blog was given by the author.

Travel five kilometres to the South of Bardaghat on Mahendra Highway in Nawalparasi district in central Nepal and you’ll arrive in a small town called Jimmirevar. It’s a rapidly growing town, geographically dissected by a busy road that runs all the way to Tribeni on the southern border between Nepal and India. Past arrivals of people from the hills in the north and the neighbouring towns has resulted in a diversity of people, languages and cultures that live side by side along the highway. Amidst the rich cultural diversity, mushrooming concrete buildings and busy markets, it’s hard not to notice the small triangular orange flags hoisted in front of almost every one of the 500 houses that make up the town. These distinct orange flags make quite a scene against the backdrop of the town, and the households hoisting them take great pride in declaring themselves Nepal’s first violence-free community.

For Indrawati Gurung and Khem Raj Subedi, residents of the town and two of the three facilitators who led a group of 10 couples to conduct this campaign, it was a challenging but inspiring journey that started from a discussion among a small group of community members, to the community-wide public declaration and commitment to being ‘violence-free’.

Idea of a ‘violence-free’ campaign

Development organizations and governments have both separately and collectively initiated ‘free zone’ campaigns across the globe, often addressing issues such as the declaration of alcohol-free zones, open-defecation free zones and child-labour free zones. In South Asian countries like Nepal, Open-Defecation Free (ODF) campaigns are probably the most popular, and the declaration of an ODF status is typically a joyous celebration for the local communities and government representatives alike.

There are two distinct aspects in almost all of these campaigns that are identifiable: a specific geographical boundary, and community participation. That being said, each campaign still has its own distinct features, implementation strategies and challenges depending on the issue it is addressing and the context in which it is operating.

While our ‘flag campaign’ shares some commonalities with other popular campaigns, including geographical coverage and mandate for public participation, this campaign required a different approach due to the complexity and sensitivity of the issue.

Firstly, there were questions related to the term itself. What do we mean when we say ‘violence-free’? How do we define violence and what forms of violence are we trying to address? While these questions can be addressed with some level of deliberation and specificity (for example in defining ‘forms’ of violence), the more pertaining challenge was over the conceptual clarity in defining what constitutes a ‘violence-free community’. Can a community or a family ever be violence-free? Unlike ODF campaigns whose success can be measured in the forms of fixed structures like the number of toilets built, and other more tangible results like improved sanitary habits, it is more difficult to define the indicators for a violence-free campaign. To address these challenges, it was crucial that the campaign received not only support but full ownership from the local community, and that there was a collective agreement on how the community defined themselves as ‘violence-free’. This community buy-in and ownership was later found to be vital in leading to the successful completion of the campaign. 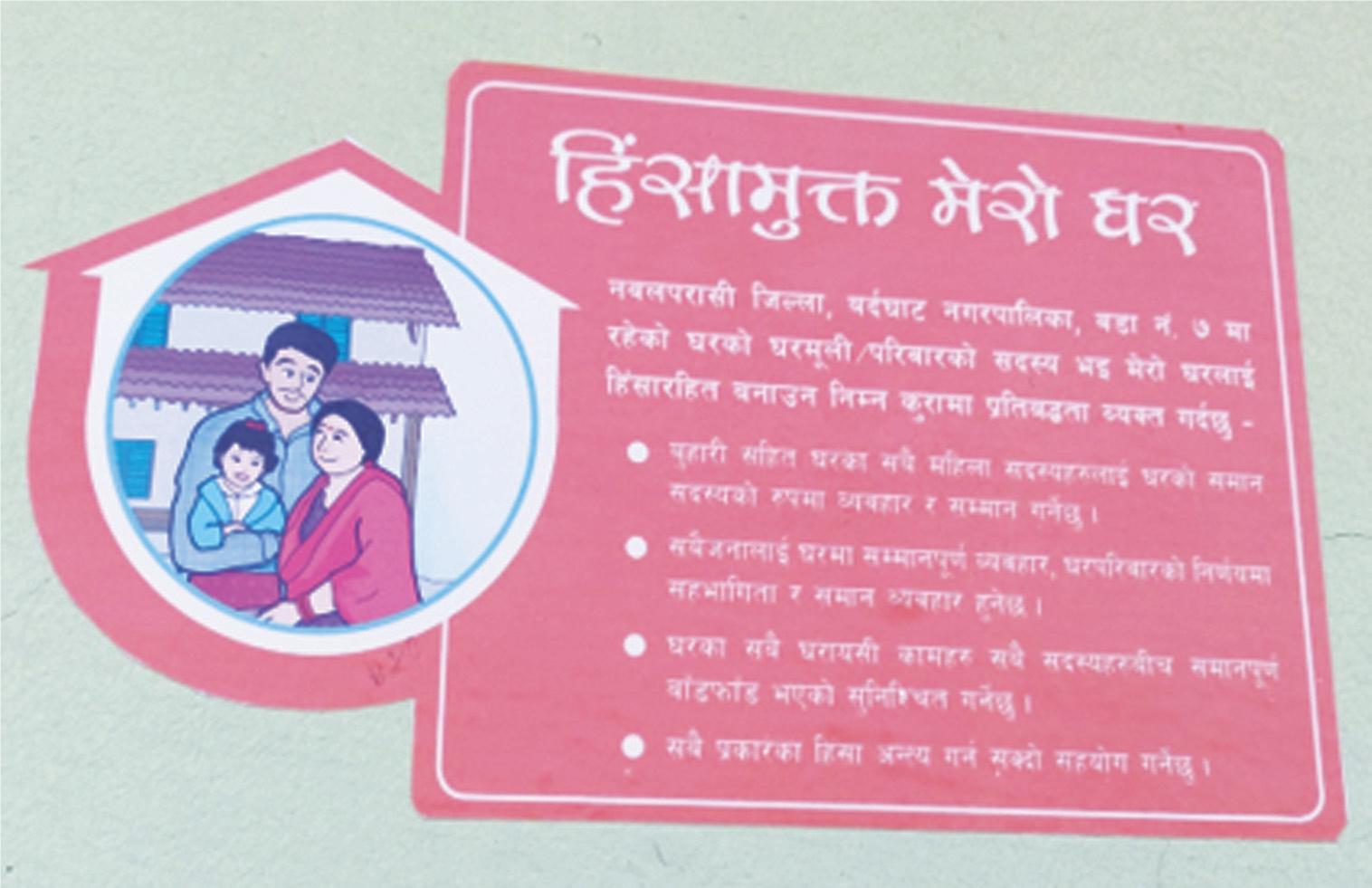 The ‘flag’ campaign is an extension of Change Starts at Home (Change), a nine-month behaviour change communication intervention implemented in Chitwan, Nawalparasi and Kapilvastu between 2016-2018 by Equal Access International with the support from DFID’s What Works to Prevent VAWG Initiative. Through nine months of a weekly radio programme, group discussion sessions and community engagement activities, the Change project aimed to shift attitudes, social norms and behaviours that underpin a woman’s risk of experiencing intimate partner violence.

Married couples in the three target districts engaged in group discussions over the content of the radio programme, and reflected on their own attitudes, norms, behaviours, and practices. There were a total of 72 groups (36 men and 36 women groups), with each group consisting of 10 married men or women.

These groups served as venues for learning essential life skills and also as a platform for planning community outreach activities. One of the findings from the project showed the potential of community level diffusion of shifts in norms discussed and experienced by the couples. As a pilot to study such pathways of diffusion further, the community of Jimmirevar was chosen. The husbands and wives, split into two groups (one male and one female) and engaged in a further eight weeks of meetings focused on community activism and norms diffusion to discuss how they could motivate change beyond the group and out to the community level.

These meetings provided them a platform to discuss and plan activities for the next five months to engage more community members in dialogues and actions to stop intimate partner violence and other forms of gender-based violence.

The first activity the group conducted was a community gathering or‘ward bhela’, where the groups invited local leaders, government officials (the ward chairperson and other representatives), local journalists and fellow community members. During this gathering, they introduced the campaign and its objective, and also discussed how the group had come to understand the concept of a ‘violence-free’ community.

At this first gathering, 80 families pledged to abide by the criteria, and were given the flags. Significant players like the ward chairperson, other ward representatives and local leaders also received the flags and declared their commitment to the campaign, inspiring a wave of other community members to do the same.

With public recognition for the campaign received during the ‘ward bhela’, the group was then able to reach different areas in the community for more detailed discussion and engagement. In the following 2-3 months, the group members visited mothers’ groups, savings groups, religious groups, schools and also conducted household visits to discuss the social norms and practices that should be reformed or eradicated to end gender-based violence in the family and community. The group also encouraged families to have better communication and empathy among each other in order to achieve a harmonious family relationship. After every household visit, once the family agreed to adhere to the listed criteria and pledged their commitment to the campaign, they were given a flag. Over the course of five months, 80 starter flags became 100, then 180 until nearly all of 500 houses had pledged to hoist the flag and follow the criteria for being a violence-free household.

When the ward chairperson, amidst a crowd of hundreds, declared the community of Jimmirevar ‘violence-free’ on April 22 of 2019, Indrawati and Khem Raj were among the happiest of people. But they knew their journey was far from over. They understood that this campaign still has a long way to go.

The success at Jimmirevar was just a single step forward. They knew that they will have to continue this discussion around the social norms and practices perpetuating different forms of violence. They knew they will have to keep working to build stronger and wider networks with local leaders and government officials, in order to ensure that this campaign continues. Their eyes sparkled with confidence when they heard from Maya Paudel, Deputy Mayor of Bardaghat Municipality, that she wants to expand the coverage of this campaign to other wards. But this was not the first time someone had suggested to extend this campaign to other areas. During the group’s household visits, people from neighbouring towns had also shown interest and willingness to participate in the campaign. At that time, at least 10 families from outside the ward had joined the campaign. The group leading the community activities knows that their journey has just begun, and while they continue to engage people in their own community, they need to aim bigger and collaborate with other communities to expand this campaign.

Who knows, maybe one day this small town of Jimmirevar, on the periphery of the Mahendra highway in Nawalparasi district, might be able to inspire big changes in scores of communities across the country and even abroad.

[Photo: Residents from Jimmirevar in Nawalparasi are seen carrying ‘violence-free’ household flags during the campaign promotion] 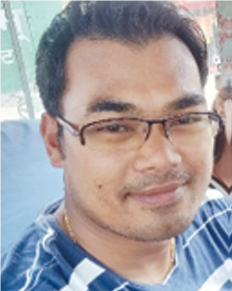 Prabin Nanicha Shrestha is a development evaluation enthusiast, and is currently working as Senior Monitoring and Evaluation Manager at Equal Access International.