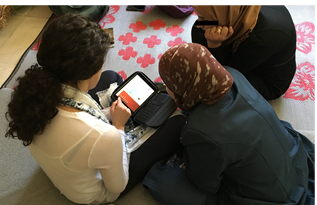 Child marriage has emerged as a negative coping strategy among Syrian families who have been forcibly displaced to Lebanon as a result of Syria’s ongoing conflict. Child marriage has profound implications, not just for the girl and for her physical, psychological and socioeconomic wellbeing, but also for her children, her family, her community, and for global development more broadly. To date, there has been very little research to identify effective interventions for addressing child marriage in humanitarian settings. With the support of the Sexual Violence Research Initiative (SVRI) and the World Bank Group, Queen’s University and the ABAAD Resource Center for Gender Equality are investigating factors that contribute to child marriage in the Syrian refugee crises. Participatory approaches will be used to identify community-based strategies that would offer Syrian families options other than to marry their young daughters prematurely.

Child marriage is a global issue of enormous importance. The United Nations Population Fund estimates that 142 million girls will marry young worldwide between 2011 and 2020 and an additional 151 million girls will marry young in the following decade, equating to 39,000 girls marrying prematurely each day. Child brides are at high risk for early pregnancy and labor complications including preterm labor, obstructed or prolonged labor, and maternal death. Infants born to young mothers are also at greater risk of low birth weight, stillbirth, and neonatal death. In fact, this form of gender-based violence (GBV) is thought to have contributed to the lack of progress towards meeting UN Millennium Development Goals 4 and 5, calling for a two-thirds reduction in the under-five mortality and a three-fourths reduction in maternal deaths, respectively.

The impact of marrying young extends well beyond health consequences. As child brides assume the responsibilities of wives, they are most often unable to continue their formal education thus limiting their literacy and future earning potential. Additionally, young girls are often married to older men and this age discrepancy contributes to unhealthy inequalities within the marriage, often compounding gender inequalities that impair women’s ability to negotiate shared decision making. Thus, experiences of physical, psychological, and sexual violence are more prevalent among girls who marry as children than among those who enter into marriage as consenting adults.

Child Marriage and the Syrian Crisis

Evidence suggests that rates of child marriage have increased in the Middle East due to the Syrian conflict and the resultant displacement. Increased child marriage during conflict and displacement is not unique to the Syrian crisis as prior evidence suggests that vulnerability to early marriage is heightened during conflicts and natural disasters. Economic necessity and a desire to protect girls from harassment and sexual violence at the hands of strangers are thought to be underlying contributors to child marriage but there are undoubtedly other unrecognized factors related to cultural and social norms which have been impacted from experiences of trauma and loss due to the conflict.

To provide new insight into the societal, economic, security, religious and psychosocial factors contributing to child marriage among Syrian refugees in Lebanon, we used an innovative mixed qualitative / quantitative data capture instrument, Cognitive Edge’s SenseMaker. With electronic data entry on tablets, SenseMaker offers the capability to efficiently collect and analyze large quantities of data in the form of self-interpreted micro-narratives. Because participants interpret their own narratives, researcher interpretation bias is reduced and the stories can be directly accessed to contextualize the quantitative data, which derives from participants’ interpretation of the experiences shared in their narratives

In July and August 2016, a team of 12 trained Syrian / Lebanese interviewers electronically collected 1,422 self-interpreted micro-narratives from 1,346 unique participants on the experiences of Syrian girls in Lebanon. The SenseMaker interviews were conducted with married and unmarried Syrian girls, Syrian mothers and fathers, as well as married and unmarried Syrian / Lebanese men and a variety of community leaders in Beirut, Beqaa, and Tripoli. Data management and preliminary analysis were performed by QED Insight and results will be further analyzed in Tableau, which facilitates pattern recognition across the various subgroups through disaggregation of the data by various demographic characteristics as well as other contextualizing factors such as length of time spent in Lebanon, emotional tone of the story, etc. In doing so, researchers can ascertains patterns in stories to obtain insights that present alternative and diverse points of view.

Example of the project’s SenseMaker data output where each blue dot represents how one participant responded to the question asked. Red circles identify clustered responses and percentages refer to how many people responded in each cluster.

This SenseMaker data will be presented back to Syrian community members in January and their interpretation of the results will be solicited. Importantly, these facilitated focus group discussions will also serve as a medium through which Syrian communities can self-identify local strategies that are feasible and culturally appropriate to address the issue of child marriage at the local level. This approach fosters community resilience and will help to empower affected families to identify elements of change, which will ultimately be more sustainable and more effective. Through our partnership with the World Bank and SVRI, the community data analysis and local strategies will be brought to the attention of a wide range of policy makers and donors that are increasing their investment and commitment in GBV prevention, response and mitigation based on solid, participatory and innovative analytical work.