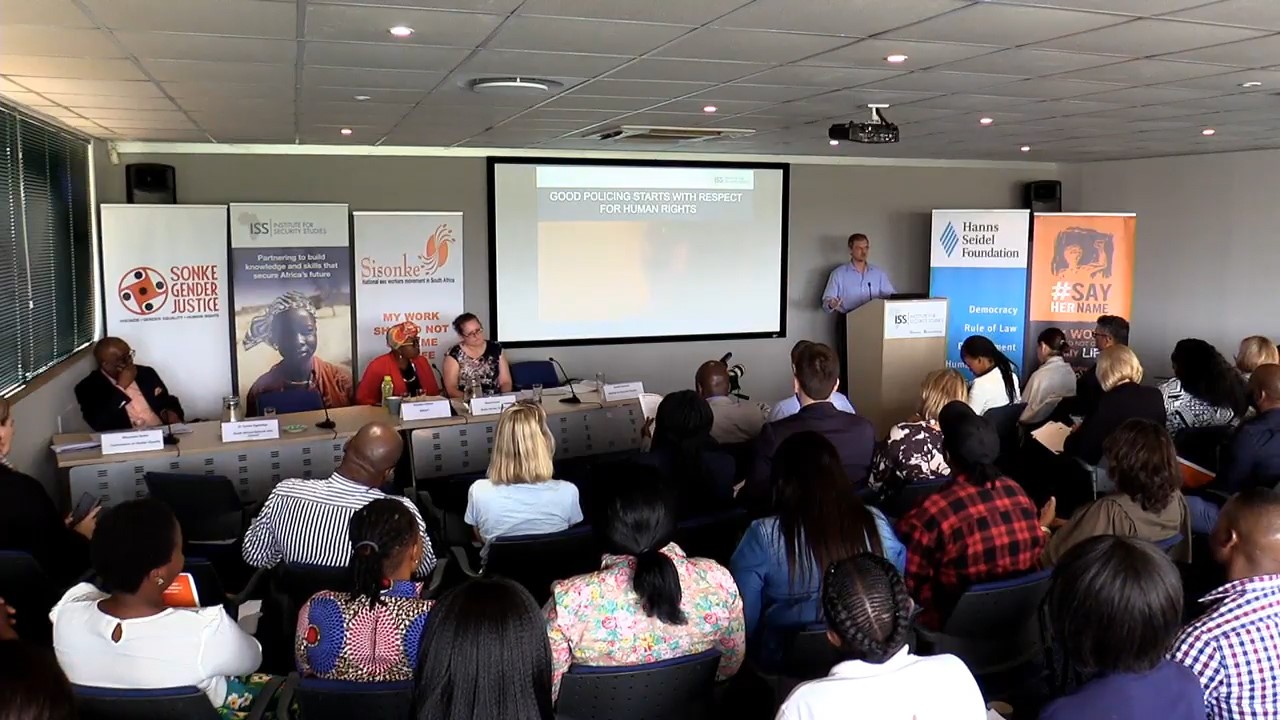 Sex Work and the Law in South Africa

Sex work in South Africa is fully criminalized. This includes the selling of sex, buying of sex and benefiting from the proceeds of commercial sex. Despite this, sex work is a livelihood strategy for many South African men and women. Gender based violence (GBV) is systematic and deeply entrenched in South African society and across institutions.  It affects all members of society.  For criminalized sex workers who generally operate in a space of socio-economic inequality and marginalization, policing operations and behaviours can significantly heighten those risks (see Women’s Legal Centre reports here and here, and ISS commentary here.) In response to a high number of complaints from sex workers about human rights violations during policing operations, SWEAT (Sex Worker Education & Advocacy Taskforce) and Sonke Gender Justice commissioned research into policing practices - “The Policing of Sex Work in South Africa:  A Research Report on the Human Rights Challenges Across Two South African Provinces”

Between February 2016 and May 2017 Sonke Gender Justice and SWEAT undertook a mixed methods study across Gauteng and Mpumalanga Provinces with 120 participants, 118 of whom were self-identified sex workers over 18 years of age.  57 randomly sampled participants completed a quantitative survey, and 63 different purposively sampled participants underwent intensive individual qualitative interviews. Only participants who had previously reported a negative policing interaction with police were interviewed to drill down into the specifics of those encounters.  Most participants were brothel, street and tavern based sex workers from metropolitan, urban and rural environments.

The 57 survey participants comprised 52 females, 2 males and 3 transgendered persons aged between 26 - 35 years.  When asked whether local police behaviour was a problem for them, 74% reported there was a problem and they avoided the police. 62% had been arrested by police, with an average of 4 arrests each.  Only 12.5% appeared at court after arrest, 53% paid a fine and 31% were not charged, fined nor appeared in court despite being arrested and spending extended periods of time in custody.  The average time spent in police custody for each arrest was 40 hours.

Semi-structured interviews were conducted with 63 participants. Most interviewees were females (n=59), 3 males and 1 transgendered person.  Most of the interviewed sex workers worked from informal brothels or were street based, and were aged between 26 – 35 years.

Numerous human rights violations were reported in these interviews ranging from unlawful arrest and detention (being arrested whilst shopping, visiting friends etc.); physical violence; torture; sexual violence and refusal by police to record crimes committed against sex workers by both members of the public, and members of the South African Police Service.

Sexual violence was the most common form of policing abuse recorded during the interviews. Sex workers reported numerous incidents of violent, predatory and perverse sexual assaults and rapes. Sexual violence seems to be an entrenched, everyday experience for many sex workers.  Frequent stories of sexual violence and rape of sex workers committed by police officers were reported as highlighted in Rosinah’s story to follow:

Several sex workers’ interviewed also spoke about police neglect - refusal by police to take their complaints and open cases when they attempted to make police reports of serious crimes committed against them. Sex workers reported being told to leave the police station when attempting to make reports, and being threatened with false charges if they insisted a complaint be taken from them, and not being believed. 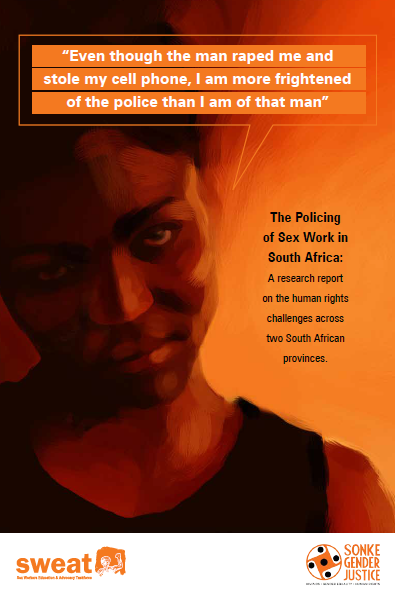 The report highlights extreme levels of gender based violence (GBV) and neglect experienced by South African sex workers during operational policing activities and the severe difficulties individual sex workers and their advocates experience in engaging with the South African Police Service, both at the police station level and strategic level. Things do need to change. Recommendations arising from the research include:

In taking these recommendations forward, the research partners, Sonke Gender Justice  and SWEAT (Sex Worker Education & Advocacy Taskforce) together with other civil society organisations including Lawyers for Human Rights, Amnesty International, Sisonke Sex Worker movement and the Legal Resources Centre, developed the Positive Policing Partnership (PPP) as the sex work sector advocacy tool to drive positive, solution-focused engagement with government and policing authorities on issues identified in the research. The main principles of the PPP approach are respect, co-operation and capacitation to catalyse positive change. The PPP moves away from an adversarial approach, and reframes the challenge as a co-operative exercise between government and civil society to identify opportunities to capacitate government and police to deliver a more rights compliant policing service. 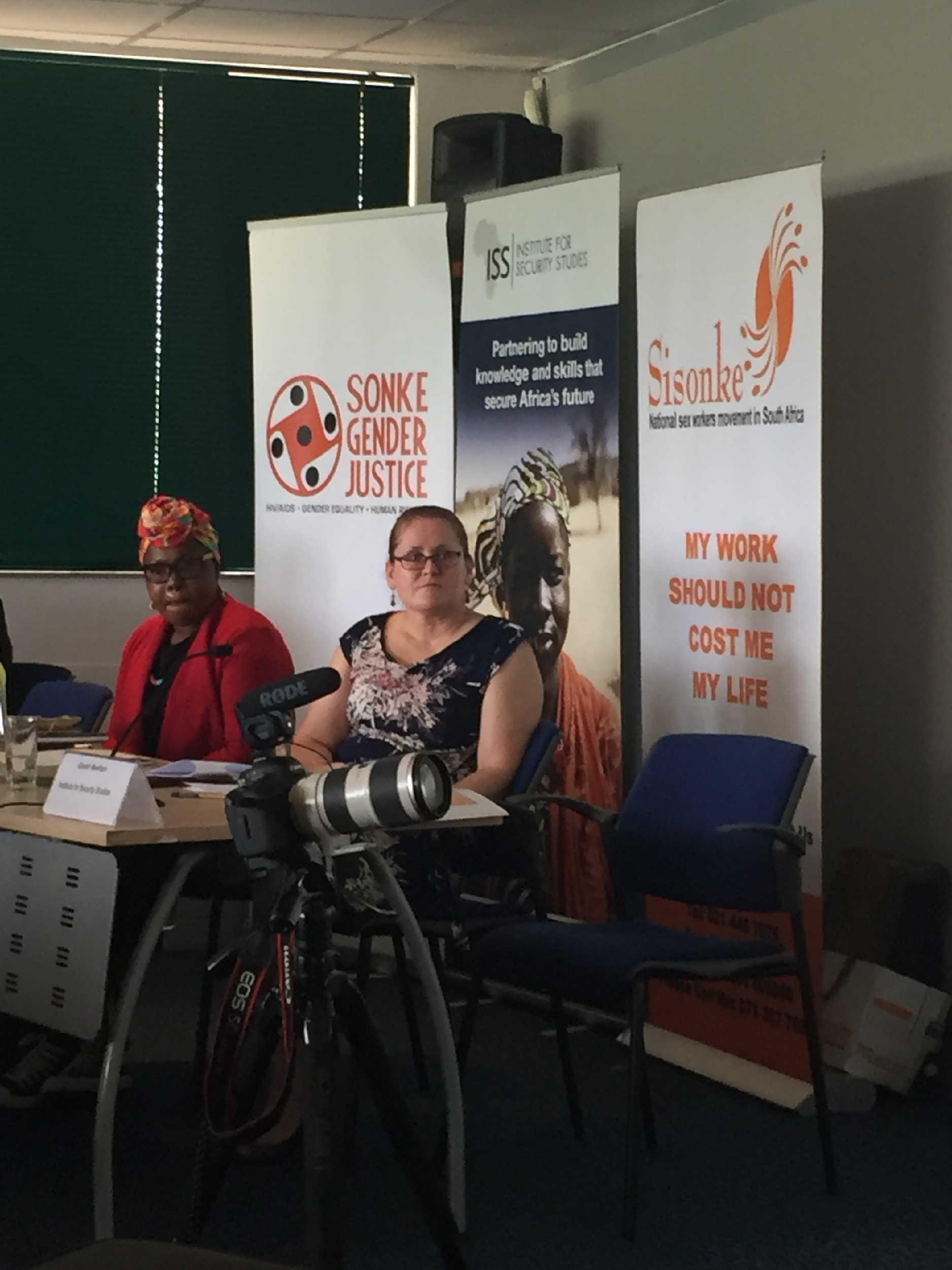 Meetings with the South African Police Service and various government departments are yielding promising opportunities. High level presentations at events such as the South African Human Rights Commission & African Police Civilian Oversight of Policing Forum Dialogue on Policing event, South African Expert Panel on Policing and the International Women in Policing conference are all helping to establish relationships, promote networks and develop a shared vision to leverage action for rights based policing practices. A submission on behalf of the sex work sector was lodged with the Civilian Secretariat for Policing on the White Paper on Safety & Security. The launch event also included a dialogue event which engaged police and different government agencies including the Department of Community Safety and South Africa National AIDS Council.

In May 2018 the Gauteng Department of Community Safety will host a follow up event from the report launch. A service audit is underway to identify interested and responsible stakeholders in Gauteng who are willing to participate in the PPP activities to bring about improvement in the policing experiences of sex workers.  An audit of services is also underway. Currently the secretariat role for the PPP is performed by Sonke Gender Justice (donna@genderjustice.org.za).  From August 2018 that role will be embedded within SWEAT (staceym@sweat.org.za). For more information on the PPP, refer to the resources on this website. A Research Brief on the report can also be accessed here .