Wartime rape and the need for reparations 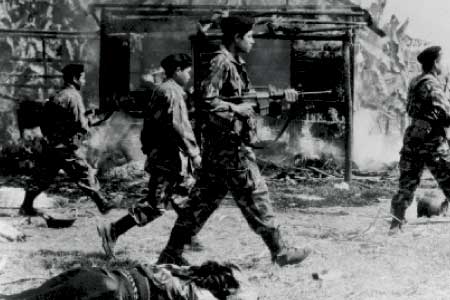 The phrases ‘wartime rape’ and ‘rape as a weapon of war’ have received much traction in recent years. This is owed to a growing awareness of the enormity of sexual violence that is routinely perpetrated during civil and international armed conflicts, coupled with the discovery that this phenomenon is not simply an inevitable by-product of war, but rather a deliberate and strategic tool used by combatants. Though the word rape is commonly used in this regard, it is crucial to understand that it is frequently used as an umbrella term for a wider catechism of sexual violence.

While writing my Master’s thesis, I came across numerous figures reflecting the apparent scale of wartime sexual violence. Some of the corroborated figures are as follows: during the Rwandan genocide it is estimated that between 250 000 and 500 000 women and children were raped;[1] during the civil war in Sierra Leone approximately 235 000 women were raped;[2] and currently in the DRC it is claimed that 1100 women are raped every day![3] The documentation of victimization in the form of sexual violence is a notoriously complex and challenging endeavour, arguably even more so in a post-conflict context.[4]  It is estimated that only 7% of survivors report their victimization.[5] Existing statistics are thus likely to be an under-estimate. Nevertheless, they give an indication of the extent and pattern of conflict-related sexual violence.

A new disturbing phenomenon has come to light: the rape of women within terrorist organisations. A New York Times article reports on ISIS’ implementation of a policy of rape and sexual slavery as part of its official ideology. Not only does ISIS use this policy to lure potential recruits, but they see it as theologically justified.[6]  Perpetration of sexual violence during conflict is not a relic of the past, but a continual feature of conflict today.

Increased global attention on this issue and numerous developments in international humanitarian law as well as the field of criminal justice, have led to rape and other forms of sexual violence being categorized as international crimes. Consequently there have been several convictions of persons indicted for rape committed during armed conflict. Whilst these few successful prosecutions must be applauded, rape in war continues and very few perpetrators are convicted. Even in cases where perpetrators are caught and punished, many victims continue to suffer the consequences of conflict-related sexual violence. Therefore the conviction of perpetrators of crimes of sexual violence is unlikely to be a significant source of relief for victims:

‘When asked about the types of reparations that female victims prefer, responses across countries and cultures followed a similar pattern: they asked for services to meet their basic needs...victims appear to be primarily present and future oriented. Their needs are so immediate that they are less concerned with the justice of the past than survival in the present and future.’[7]

Thus while still trying to prevent and punish rape in war, we need to also focus on the provision of reparations, regardless of the criminal conviction of the accused. Reparations have been described as ‘the most victim-centered justice mechanism available and the most significant means of making a difference in the lives of victims.’[8] Reparations must reflect the numerous, interminable and harmful consequences of conflict-related sexual violence, namely: physical ailments that often require immediate medical attention; emotional and psychological suffering; social exclusion and stigmatisation; and resultant monetary issues. It is only when these are addressed that victims can experience true justice.

The ICC is a permanent court, established by the adoption of the Rome Statute. The ICC has jurisdiction over ‘the most serious crimes of concern to the international community as a whole’; namely: genocide, crimes against humanity, and war crimes.[9] It is a court of last resort, which means that its intended purpose is to intervene in cases that domestic courts are either unwilling or unable to prosecute.

Key challenges faced by the ICC in providing reparations identified in legal and published literature, include:

There is a clear need for certain reforms to be made in order to allow the ICC to make adequate, realistic, effective, and timely reparation orders to victims of conflict-related sexual violence. Amendments to certain Rome Statute provisions and ICC Rules of Procedure are therefore necessary. A separate tribunal or chamber of the Court, which deals exclusively with the provision of reparations to victims, and which runs parallel to the criminal trial of the accused would allow victims (who are formally determined as having ‘victim status’) to be given redress, regardless of whether or when the accused is convicted of the crime. In so doing, this would avoid challenges prevalent in ICC court procedure that hinder the award of effective reparations.

Rubio-Marin, Ruth 'Reparations for conflict-related sexual and reproductive violence: A decalogue ' (2012) 19(69) William And Mary Journal Of Women And The Law 69.

Wachala, Kas 'The tools to combat the war on women's bodies: Rape and sexual violence against women in armed conflict' (2012) 16(3) The International Journal of Human Rights 533.

'"We'll kill you if you cry": Sexual Violence in the Sierra Leone Conflict' (2003) Human Rights Watch.

[3] Kas Wachala 'The tools to combat the war on women's bodies: Rape and sexual violence against women in armed conflict' (2012) 16(3) The International Journal of Human Rights 533 at 547.

[8] Ruth Rubio-Marin 'Reparations for conflict-related sexual and reproductive violence: A decalogue ' (2012) 19(69) William And Mary Journal Of Women And The Law 69 at 73.

Zia is a graduate from the University of Cape Town (UCT). In 2013 she completed a BA LLB, and last year she studied an LLM specialising in Criminology, Victimology and International Criminal Law. Her master’s thesis focused on the proliferation of wartime sexual violence, the harmful consequences experienced by female victims thereof, the resultant need for international courts – specifically the International Criminal Court –  to provide effective and holistic reparations to these victims, and the challenges facing the ICC in doing so. Zia is passionate about gender justice, criminal justice and the protection of human rights – particuarly within the areas of gender-based violence and international crimes. She can be contacted at: wasserman.zia@gmail.com