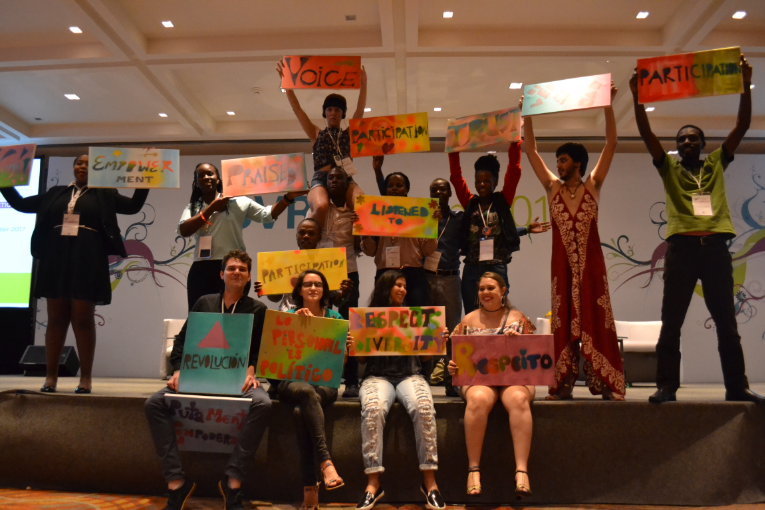 There is an increasing emphasis on young people and other stakeholders’ participation in research on violence against women and violence against children. Yet, young people’s participation in research on such sensitive topics is a challenging issue for many academic researchers[1]. Further, the active involvement of young people in the research beyond their role as subjects of research has been a notable gap in research presented at SVRI Forums – one of the key premier events in the research field on violence against women and children in low and middle income countries – as has been an absence of young people among Forum delegates[2]. In response, the SVRI with support from Oak Foundation, partnered with the University of Bedfordshire’s International Centre on the Being Heard project to promote the active, ethical and meaningful engagement of young people in research and global events on sexual violence, such as the SVRI Forum 2017.

The Being Heard project

SVRI Forum 2017 brought together over 550 researchers, gender activists, funders, policy makers, service providers, practitioners, survivors and young people from around the world to share emerging research findings, to network and learn from others in the field of gender based violence and other related forms of violence. The conference was held in Rio de Janeiro, Brazil from 18-21 September 2017. In an effort to bring young people to the event and develop Minimum Standards for doing so, the Being Heard project, through a competitive process selected, 10 young researchers and five facilitators from nongovernmental organisations in low-and middle income countries who have been involved in participatory research on violence.  The table below outlines the key steps taken during the different phases of SVRI Forum 2017 to ensure full engagement of the young people in the event:

Being Heard project’s contribution to knowledge

The Being Heard project was more than a consultation with young people on how to engage them in research and global events. In the words of one of the young people:

“The being heard experience was so much more than an event, so much more than being part of a movement setting out to create minimum standards of youth participation in international conferences, so much more than the learning and the inspiration drawn from older researchers, Being Heard was simply the planting of a mustard seed." – Lightwell Mpofu, ACDPT

After SVRI Forum 2017, the young researchers shared the knowledge gained with their colleagues and other young people in their respective communities, some revised their workplans and programmes and others reported job promotions because of their attendance:

“We've all (me, Diana and Apofia) been promoted at work and we have been sharing our experiences from Rio both at local and international meetings. We have grown...our connection as an organisation with the RISE network has expanded and we look forward to getting more opportunities. Hopefully we can meet again at the SVRI forum in Cape Town and share more!”  - Lunkuse Joanitah, UYDEL

“I was just reflecting how BEING HEARD, Rio Forum, just over a year ago, resulted in a growth spurt for Leandre, Lightwell and Community Publishing. Both in the quality, quantity and range of publications we produced this year, and training based on the publications. We are finishing our 9th and 10th publication this year! but also in terms of personal growth and travel, Leandre getting a scholarship to do a Masters in Conflict Transformation, and Lightwell’s work and travels in Lesotho, Zambia, Korea and taking his poetry to another level. And of course, through SVRI, continuously learning more about reducing GBV. I hope all the young researchers have also grown from the BEING HEARD experience. And that some of us meet in Cape Town at the next Forum" - Kathy Bond Stewart, ACDPT

The next SVRI Forum is being held in Cape Town October 2019. The SVRI hopes to welcome more young people to the Forum to learn from their experiences and share knowledge in advancing the field of VAW research. Abstract submissions for Forum 2019 close on 25 January 2019.

The project produced a number of valuable tools that can be used by others engaging with young people in international events on sensitive topics like violence against women and violence against children. The outputs include: A toolkit outlining the steps taken to ensure the meaningful and ethical engagement of young people at SVRI Forum 2017- which can be found online here: Engaging young people at SVRI Forum toolkit; The toolkit is complemented by two videos: One summarizing the Minimum Standards, and one showcasing the young people’s journey at the event. As part of the project, the International Centre also produced a scoping a review entitled: “Promoting children and young people’s involvement in participatory research on sexual violence – findings from an international scoping review”

For webinars on the project, visit: http://www.svri.org/content/being-heard-webinars

For more information on the Being Heard project, visit: http://www.svri.org/what-we-do/capacity-development/projects/being-heard